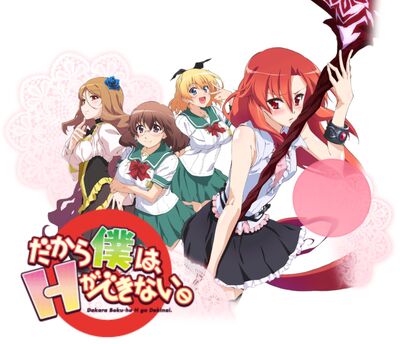 Welcome to the sex channel

Beginning in 2010, the light novel series amassed 11 volumes. The 11th Volume, which is to be released 20 August, 2013, was announced to be the series' climax and the Light Novel's final volume on 1 August, 2013. The Light Novel began adaptation into a manga series in 2011, in which there are now 4 volumes. Finally, in winter 2011 a 12 episode anime was announced for summer 2012, running from July to September. On March 27th, 2013 a 13th episode directly following the anime was released as an OVA.

See what's new and happening in the franchise!

You may use the above bottom to contribute to the wiki; contributions may include adding photos, adding information onto your favorite character's page, creating articles, and more. If you need help editing, you may refer to the help page, or ask an admin or other user for assistance.

Retrieved from "https://bokuh.fandom.com/wiki/Dakara_Boku_wa,_Ecchi_ga_Dekinai_Wiki?oldid=4347"
Community content is available under CC-BY-SA unless otherwise noted.